In L.A.: a wonderful hand bookbinder, a great bookstore 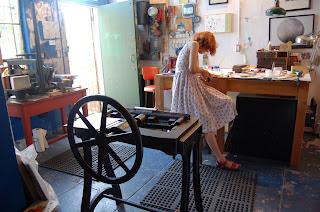 A 1/2 mile from my house in Los Angeles is a hand bookbinder who does exquisite work and a great bookstore. Near the intersection of Larchmont and Melrose Avenues a few doors west of Larchmont at 5720 Melrose is a shop with a sign saying The Bindery with many books and a hand press in the window. A sign on the front of the Bindery says enter in the rear (there is a doorbell for seniors), so I went around the rear, opened up a metal gate in a vine-covered fence, descended a few steep steps and into the Bindery (M-F 10:00-6:30 pm; Sat. 11-4:00; 323-962-2109) to discover the workshop based on love of books.

The shop owner, Charlene Matthews, is a hand book binder. She does fine book restoration: restores and repairs o 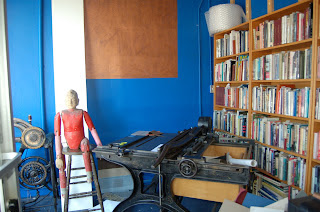 ld books; makes one-of-a-kind book cases; creates one-of-kind artist's and photos books; and does silkscreens. My thick Oxford English Dictionary (OED) had lost its back cover, and Matthews did an excellent job repairing my OED, even adding my initials to the binding. She showed me some of hand-made book cases, which are just lovely and specially designed for each book.

Matthews metal presses are fascinating: She has two job backers presses for working on a book's spine and four book presses to press a book flat. The walls of the Bindery have bookshelves of fine hardbound books for sale. I picked up quite a few unusual art books and novels there. At her shop she gives classes in hand bookbinding for LA Book Arts and also holds her own private bookbinding workshops. She had a website (http://www.charlenematthews.com) which illustrates some of her elegant book arts: her books are regularly exhibited in art shows. Her one-of-a-kind photo books are really wonderful! What's fascinating about Matthews' work is that she carries on a 500-year old tradition of book binding but also creates post-m 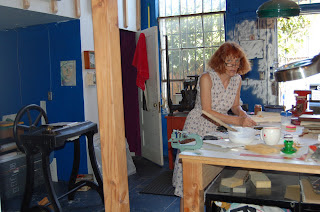 Heading out of the Bindery back to Larchmont, if I walk a block east on the corner of Gower and Melrose is Astro Burger with a sign saying "vegetarian." Inside they do have burgers, fries, and shakes but also a long vegetarian menu, as the owner claims invention of the veggie burger. The veggie burger deluxe with avocado is terrific along with fried zucchini (cooked only in healthy oils) as Astro is a rarity: a fast food health conscious burger shop.

Refueled by a veggie burger, I walk back to Larchmont, start south two blocks. In the 2nd blook on the westside is Dawson's Bookshop/Michael Dawson Gallery at 535 No. Larchmont (W-Sat 10:00-5:00, 323-469-2186; www.dawsonbooks.com), one of Los Angeles two oldest bookstores (the other is Vromans in Pasadena). I head off the street off the walkway into the huge brick building with racks of books in front and the photo gallery in the back to enter a booklover's bookstore.

Dawson's not only sells books but has made Los Angeles book history. Starting in 1905, Ernest Dawson had his bookstore in three locations downtown, specializing in books on LA, California, and Western America. The second generation Muir and Glen Dawson, both superb mountain climbers (Muir is named after John Muir while Grant had a mountain named after him) moved the bookstore to its present generation, published books (including a wonderful photo book of the Victorian houses on now demolished Bunker Hill), and were closely connected with L.A.'s three great fine printers--Ward Ritche, Grant Dahlstrom, and Plantain Press (I worked for a short setting hand type at Plantain Press when I was a young poet).

Michael Dawson, the 3rd generation and an expert in photography, established in 2000 a photo gallery specializing in California photography. The current show, Scott B. Davis's "Los Angeles Night" photos running until February 3, has erie lonely portraits of the nightime city. Dawson's wonderful website has a photo section which has selections from many previous photo shows, and is an education in Western photography. Photo exhibit after exhibit have exposed amazing and distinct photographers--both historical and contemporary.

The bookshop also has LA Salons on Saturday afternoons, the next one Saturday, December 9, at 2:30, featuring the book Picturing Los Angeles with its authors Jon and Nancy Willman, long-time Angeleno documentary filmmakers. At a previous L.A. Salon this year I heard Peter Richardson speak about his book American Prophet: The Life and Work of Carey McWilliams. I've long been a great admirer of McWilliams, a 1930s radical writer, lawner and civil rights actvisit; he is also best historian of Los Angeles whose book Southern California: An Island in the Sun has been an inspiration to generations of writers in this city.

Of course, browsing Dawson's is also a great experience. I've bought some of my most treasured L.A. books there such Mary Antin's autobiography; Antin was the first great environmental writer of Southenrn California. Last weeend I got Charles Jenck's Hetereopolis: Los Angeles, the Riots and the Strange Beauty of Hetero-Architecture, a fascinating recent book about this city's new amazing architecture in response to the 1992 riots. Jencks was the writer who first defined the idea of post-modern in architecture. So Dawson's like the Bindery is rooted in the best of past book traditions pushing forward into the new century. Visiting both the Bindery and Dawsons in one afternoon is indulging oneself in the best of LA's book arts!
Posted by California Writer at 10:34 AM

You've got a typo in that URL for the bindery. It should read:

And you're right - she does BEAUTIFUL work!

Thanks for telling me about the typo. I fixed it.

Thanks for the info. I'm doing the finished art for a math textbook of about 350 pages. I'll probably go with a larger outfit, but will keep them in mind for some other projects.

Hey, Did you ever see the movie "Joe Gould's Secret?" --One of my favorites.